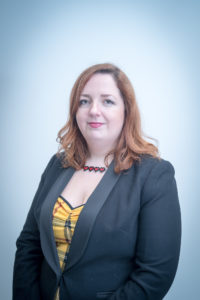 I joined the Child Poverty Action Group as a trainee solicitor and Justice First Fellow in January 2019. I graduated from Cardiff with an LLB in Law and Politics and went on to study the Legal Practice Course, also at Cardiff.

After working as a debt caseworker on the Community Legal Advice helpline, I used the skills and knowledge that I had gained to take a post as a Benefits and Money Adviser with the Royal British Legion. My work involved advising on benefit entitlement, discussing options for dealing with debts and representing at tribunal.

During this time, I also worked on improving financial education for the Armed Forces, as poor understanding of financial products and lack of budgeting skills was compounding the financial issues faced by Early Service Leavers and injured or ill personnel when they left the Armed Forces.

Working in this field allowed me to see the issues that were being faced by very vulnerable groups; the benefits system was working against them, leaving them with negative budgets and accumulating large sums of unmanageable debt. While I was able to assist on a case by case basis, I look forward to making a difference on a more systemic level with CPAG.

For my project, I will be looking at conditionality under the Universal Credit system, and the failure to tailor conditionality to suit the claimant’s circumstances.

Currently, the DWP is responding to any challenges to conditionality on the basis that it has not been personalised for the claimant by amending the requirements on that particular claimant, so that the conditionality is achievable. However, this allows the DWP to avoid addressing the fact that personal circumstances are not being taken into account when applying conditionality, which is setting many claimants up to fail.

My intention is to gather evidence of cases where conditionality has not been personalized, in order to demonstrate that this is not an issue that is arising in a few cases, or the practice of a few Work Coaches, but that it is an endemic problem across the UK.