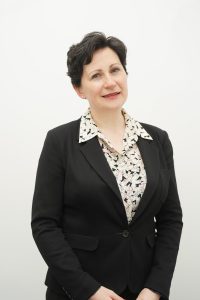 I found out I wanted to be a lawyer as a child, during arguments with my brothers around the dinner table. My father was a GP and my mother was a teacher, so I grew up in an environment where working within the community and adding value to the lives of others was what shaped our family life.

At school, languages were my favourite subject, so I studied French, Spanish and Italian, and went on to read an MA in Spanish and Portuguese at university. During those years, while studying and working in Brazil and Cuba, I got a sense of what it’s like to live in societies where a questionable rule of law and precarious social welfare systems present remarkable challenges in everyday life.

I graduated, moved to inner city Birmingham and entered local journalism at the BBC. The global economic crisis of 2008 hit just as I was beginning to appreciate that the inequalities I had naively understood as developing world issues take hold on people’s lives right here in the UK.

Working in online journalism was an incredible experience, and taught me invaluable lessons about client engagement and objectivity. In the back of my mind, however, I was anxious to do something that made more of an impact. I know it is a cliché, but I wanted to help people, rather than just reporting on their situations and then moving on to the next story.

I founded a production company, specialising in live arts and community engagement. For eight years, I worked in neighbourhoods across Birmingham and Brazil, curating creative encounters between people from all walks of life.

Anyone who has run their own business knows about the long hours, the precarious pay, the fact you can never really switch off, and the unbeatable thrill of a success borne of your own invention. Challenges and rewards came in equal measure, and I met so many incredible people. I won awards for my work, and some of the projects I founded are still going today, all on their own, which makes me really happy.

Crucially, this work helped me to fund my legal studies, which I began part time around my business. Social welfare is not a sector much discussed at law school, so at times I felt a little out of place amongst the students chasing training contracts at commercial firms. I crashed through several ill-fated interviews in this vein, keen to get my head around the process. During feedback phone calls, I was told over and over again, ‘we just don’t think you want to be a lawyer.’ I realised I would need to carve out my own route into the legal profession.

Thanks to my business contacts within Birmingham’s refugee community, I secured long term work experience at Asylum Support and Immigration Resource Team (ASIRT) and Birmingham Community Law Centre (BCLC), which led to a debt advice job after my LPC. Only then could I finally put a name to the kind of law I wanted to practice, amongst some of the most dedicated, warm hearted people one could wish to know. Social welfare law is fuelled by a mix of moral outrage, empathy and incredible emotional resilience – that applies to clients and practitioners alike.

The issues social welfare clients face range from destitution to homelessness, from the nightmarish asylum system to inexplicable denial of essential services. You have to learn early on that no one is ever going to turn up at the office just to let you know everything in their life is going fine. The best advice I can offer anyone going into this sector is to learn to remind yourself that your clients are already doing better than most in their situation, just by accessing legal advice. That thought – along with lots of coffee and a dry sense of humour – really helps to concentrate the mind.

It’s a pleasure, and a responsibility, to be sitting my Justice First Fellowship at Deighton Pierce Glynn’s Bristol office. DPG formed from the merger of firms specialising in Public Law and Actions Against the Police. It’s a niche firm – one of the few remaining Public Law specialists with a Legal Aid contract. Its caseload is built around helping disadvantaged people – many from migrant communities – and there’s a focus on strategic litigation, where Judicial Reviews are brought to question policy and systemic failures, as well as bringing challenges on behalf of individuals. DPG has close ties with campaign and 3rd sector organisations, which speaks to my professional background.

Through my Justice First Fellowship project I assist Welsh Refugee Council caseworkers to identify asylum support and destitution cases. WRC are members of DPG’s Pre Action Protocol project. They asked for support in drafting PAP letters, and guidance on how asylum seekers and other migrants in Wales are impacted by Welsh legislation. I assisted WRC to draft a Welsh specific PAP letter around the Social Services and Well-Being Act (Wales) 2014 – which led to preventing a client eviction. This letter is being adopted as a new Welsh PAP template. We also collaborated to assist a very vulnerable client in her claim for psychiatric damage against the Home Office, and WRC caseworkers know they can contact me with any questions relating to their clients. This in turn has helped DPG to get a clearer picture of public law issues facing migrants in Wales.